LOS ANGELES, CALIFORNIA —  Our hearts are with those in California who have been forced to flee their homes;  run for their lives, and to those who have already lost a loved one.  California authorities confirmed to multiple outlets that at least 30+ people have died; 228 people remain missing as of this writing,  and more than two dozen celebrities have been forced to flee their homes. 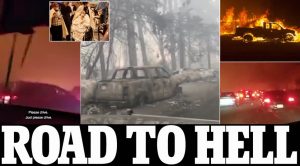 Everybody from Kim Kardashian-West;Kanye,  Kourtney Kardashian, Cher, Lady Gaga,   Caitlyn Jenner, and dozens of others have either found themselves in the eye of the fire — or flat out lost their homes. It was confirmed this morning that singer Miley Cyrus has lost her home in the fire.

Please remember people. Animals are people. Please do not leave your animals behind if you have time to take them.  Take them with you!

Meanwhile,  areas including Malibu and those within close vicinity remain under evacuation orders.    The city of Paradise, however, wasn’t so lucky and has been reduced to ashes.   The Camp Fire (as it has been called) has raged through much of the area, and, resulted in the city of Paradise becoming next to nothing.

The following pictures may be triggering to some, and, we are issuing a content advisory warning.