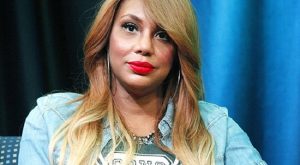 Singer Tamar Braxton is no stranger to revealing controversial things about herself, but this time,   she may have taken it to a whole new level.   According to our  sister-site Popglitz.com, Braxton, revealed over the weekend that she “had been molested and raped by multiple family members growing up” and “it had become a common thing”.

Appearing on The Wendy William’s Show (in minor detail) Braxton alleged that she had been molested  by both sides of her family, but, didn’t  jump into too many details while on air.    The Daily News has learned through the grapevine, that, Braxton ‘s only family appears to have slightly turned on her   over the interview itself.

Braxton ‘s rep declined to comment. In other news, it appears Braxton has a hot new wealthy African boyfriend.