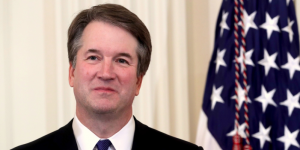 It is worth noting that this story is still developing, and,  the details are still fairly murky. On Sunday, the New Yorker (Ronan Farrow, and, Jane Meyer) reported that Brett Kavanaugh has yet another accuser. That woman has now been identified as 53-year-old Deborah Ramirez.

Initially,   word of the accusation and the story from the magazine circulated among journalism circles (including our own).     Sunday afternoon was met with several reports of an alleged 2nd accuser, where,  it had been claimed that Kavanaugh had assaulted her in almost similar fashion to Dr. Ford.

The story is now published inside the New Yorker.   The New Yorker opens its damning new report by confirming that the Senate is indeed investigating the claim, some of which, has the alarming potentially to likely crash Kavanaugh’s hopes of being nominated to the Supreme Court.   Alike Dr. Ford, it, appears that Mrs. Ramirez  may have also been sexually assaulted at a college-frat party during the semester year of 1983-1984.

The New Yorker claims that the magazine learned of the accusation just days after Dr. Ford ‘s own accusation had been made public.  Ronan Farrow, one of the mag’s premier reporters,   alleges that the accusation indeed is credible — and furthermore — paints a historical and dark pattern at the hands of Brett Kavanaugh.

Interestingly, only a few details between Ramirez’s account of assault and Dr. Ford ‘s account of assault differ. In Ramirez account, it, is being reported that Kavanaugh “allegedly  exposed his penis to her at a party, and then,  forced it in her face without her consent causing her to touch it” reads part of the story.   The article goes on to then claim that this particular incident was indeed witnessed by others, who,  further allegedly shouted down the hallway that “Brett Kavanaugh just exposed his penis to Deborah”.