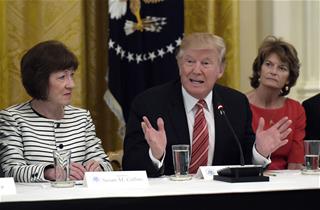 A new nightmare Healthcare Bill is making its way through D.C

WASHINGTON — A new nightmare healthcare bill is making its way through the Capital today, and, we’ve got the skinny on the Lindsay Graham introduced bill.   Some headlines are declaring that the Affordable Care Act is “truly in danger” while others, uh, are shrugging their shoulders at yet another act-of-self-destruction at the hands of the GOP.

The New York Times editorial board came out swinging against the plan today. Mostly, because it would cut if not entirely end the subsidies that assist people in getting the coverage that they need.  Furthermore, it would all-together end the expansion of Medicaid.

The Washington Post rounds up why it may pass the Senate, but, likely won’t pass the House.

Published in Battle for Healthcare