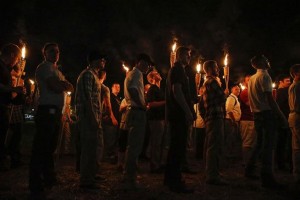 While racists are continuing to be racist,  the fallout from the Charlottesville riots rages on.  According to numerous reports; internet savvy social media users, and one particular organization:  people are losing their lives over white nationalism.

The Washington Post reports that one man (as we previously reported) Pete Tefft was disowned by his family after his views and attendance of the rally were apparently made public.  Tefft, has yet to actually publicly comment on the situation. However, his dad penned an open letter on INFORUM, pretty much telling him don’t come home as long as you are a racist piece of crap.

Meanwhile, an Arkansas man is feeling the heat tonight after being wrongly identified as a Charlottesville protester.   While we won’t actually continue to fan the fire by naming the poor guy,  we’re told that he had to temporarily move out of his house after being wrongfully identified on Twitter. Death threats towards he and his wife are apparently a very real thing.

The Marshall Project has more on the wrongfully identified man.

In other news,  Entertainment Weekly, reports that Jennifer Lawrence can partially be blamed for fanning the fire. According to EW,  Lawrence took to Facebook encouraging social media users to identify who they could online.

More From: Your take?