Surprise Surprise, Trump, is in bed with those that make dangerous chemicals 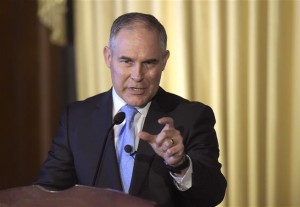 A letter obtained by the AP has shed some light on companies like Dow Chemical and co, most of which, is so far in bed with Donald Trump that they’ll likely get their way. According to the letter, Dow, has asked that the government in the United States set aside their “flawed studies” so that Dow Chemical may proceed in making pesticides that have been deemed harmful to the environment.

Government scientists apparently found that many of the proposed new pesticides by the company “violate environmental standards” and that the government would not give immediate green-light for their make.   Dow fired back by reportedly garnering their own scientists and delivering a “scientific rebuttal”, although, that still didn’t seem to work. Cue, er, the letter.

The letter states that the “studies shown are flawed” and “prevent Dow Chemical from doing its job”.  Although, one must point out that Dow Chemical CEO Andrew Liveris is actually  a really close adviser to Donald Trump in the White House. At one point or another, er,  Liveris wrote a $1m check to Trump ‘s inaugural fund earlier this year (presumably in hopes that that would create a cozy environment between the two.)