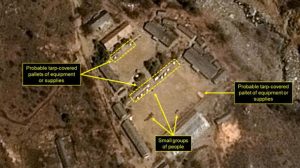 In an expected move by Donald Trump, U.S warships and heavy bombs are surrounding  North Korea according to reports. Reports indicate that Donald Trump has made it clear “that if NK signals its nuclear trigger during their celebration, we, will strike”.

Satellite images obtained by the Daily News have confirmed that North Korea appears to be planning to test its nuclear abilities and the weaponry it has secretly possessed for years.  Well placed military sources confirmed that in China, Chinese officials, are scrambling to ease tensions in the Korean peninsula (to avoid any international disasters one says).

We will share more information as it becomes available.

UPDATE:  NBC News has additionally confirmed that the threats of war come from North Korea’s apparent “Big event” occurring this weekend. That “Big Event” is reportedly the testing of a newly formed nuclear weapon that is believed to hold the power to wipe out the West Coast.

Senior Korean officials in the region confirmed to  The Daily News that “while tensions have mounted we have received intelligence indicating that the North’s “big event” is more than likely something to do with a nuclear test. The west has made it clear in briefings and secured communications that a coordinated strike will occur”.