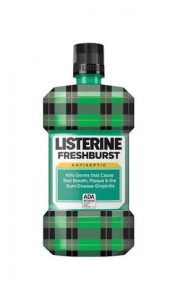 At least according to Listerine itself. In a new study published in an STD medical guide,  Listerine has apparently come out claiming as it did back in the 80’s that it could prevent a case of gonorrhea in the mouth. Yeah, that pesky STD that one gets after performing oral sex.

(All the more reason not to, ehum). Researchers apparently tested upwards of 58 men with gonorrhea apparently also making the recipients gargle with mouth wash (on both ends).   The recipients who washed with Listerine were more likely not to test positive for gonorrhea five minutes after performing oral sex.

Jezebel warns against getting excited right now though.  Researchers apparently haven’t quite got as far as they’d like to, with, only  the Listerine being effective in removing bacteria around the throat — not entirely in the back of the throat itself.

win
0
win
Loves coffee; cute animals, and the world around us. I serve as the Editor-in-Chief and the President of the companies in which own Bazaar Daily News. Follow me on Twitter @HaleemKhane for more amusing updates. *I do not discuss my own political views for obvious reasons*

More From: Your take?