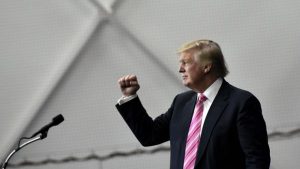 Republican presidential nominee, irrevocably the first presidential nominee in America in a long time not to release his modern tax returns. But, whatever title you give him, he isn’t immune to investigative journalists digging deep for any sign of wrongdoing by Trump.

First and foremost, Trump is indeed not as rich as he claims he is. And if he is, he’s in trouble for lying to the IRS about the amounts of losses in 1995 that he reportedly on his returns. The New York Times discovered that he reported $916m in losses that year, which enabled him to practically evade paying taxes for the rest of many of our lives.

The news came after The TIMES reportedly obtained a stunningly verified copy of Trump’s 1995 tax returns despite his campaigns endless crusade to keep them from public view.  Clinton, wasted no time in pouncing on the revelations of tax dodging on behalf of Trump for the past 18 or so years.

This bombshell report reveals the colossal nature of Donald Trump’s past business failures and just how long he may have avoided paying any federal income taxes whatsoever.,” said a statement from the Clinton campaign.

Trump’s campaign claims that Trump dude nothing wrong, echoed by NJ governor Chris Christie which said there was nothing illegal going on here.