Editors note: This is just a friendly reminder reminding people that you should never click on anything you don’t know where such thing came from (that includes text messages.) On Tuesday, I received a really strange verification code text message for an app I have never heard of.

It’s called Last2Chat . According to the internet, the app itself appears to be likely a scam. A reddit forum emerged days ago of others who have also gotten the text and noted that something seems a little odd. The app on Google ‘s Play Store only has apparently six reviews.

Their Facebook in fact is inundated with angry users who have received their random text at all hours of the night.

This is the text message that I received from the apparent app which describes itself as a place to debate the news.

Warning: Do not download the app. It appears to be a scam to get you to give your information.

Previous post Biden wants to dramatically change the way America talks about race, here’s how he plans to do it 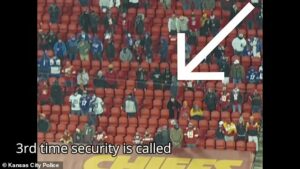 Next post According to the Kansas City PD, this is why Trey Songz was arrested

Leon Andrade, the man at the center of a lawsuit over a service not performed and unreturned item involved in...