The information contained in this report contains information that is very concerning and alarming.   This article contains responses and refutations from Nicki Minaj herself.    We’d like to remind readers that these are very real convictions, and, they are following Petty for the rest of his life.   Nicki Minaj has repeatedly indicated that she has overlooked the convictions and largely believes he “is a matured man’.

Huge news in the Barbz Kingdom this weekend.    On her radio show yesterday, Nicki, confirmed that she is getting married to boyfriend Kenneth Petty.    According to Minaj, they’ve even gone as far as to already get their marriage license.

While we are certainly thrilled that Minaj feels she’s found happiness, we’re not so thrilled that she has chosen Petty as the man to spend her life with.

Court records accessed by us on Sunday (literally using public record) show that Kenneth Petty has a rap sheet suited for a drug dealer from the south side of Chicago.   Beginning in 1995 —   Kenneth Petty was arraigned; charged, and thrown in prison for the rape of a 16-year-old girl that he allegedly forced himself upon per records.    He spent four years in prison and was forced to register as a sex offender.

Let the record reflct that a  1995 affadavit stated by the victim reads [He came up behind me while I was walking down the street in Queens.   He had something to my back that made a clicking sound” — she reportedly believed that to be a handgun.  The victim then says [He told me to keep walking, and, took me to a house down the block where he forced me into a room upstairs].

READ  Photo: Nelly has been released from prison, releases statement

The document revealed that following the  rape — the young woman was held against her will in the room for several hours.     She at some point (which is murky) was able to strike Petty with an object long enough to get away. 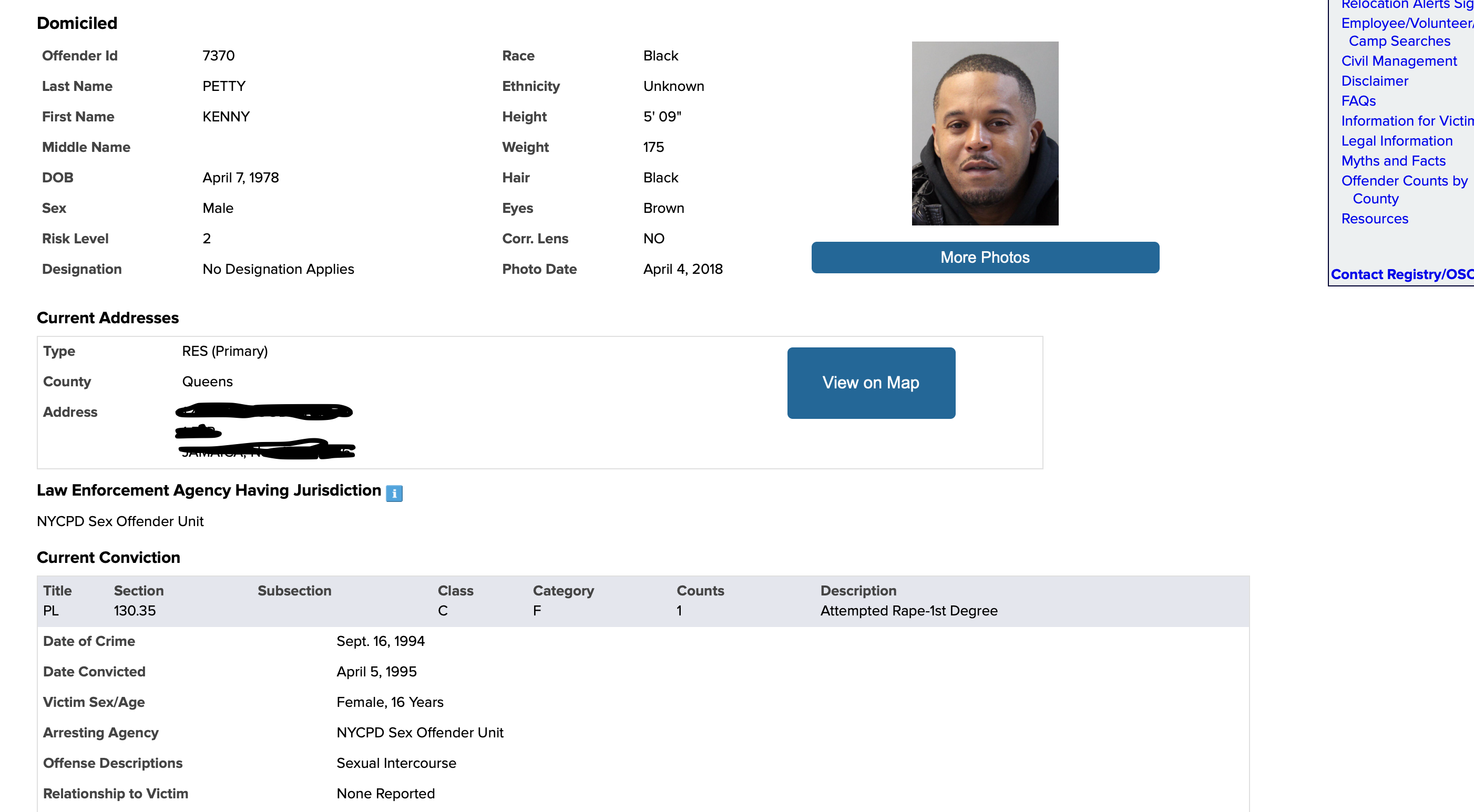 Kenneth Petty has a history of pleading down cases.  Court documents of the actual case show that Petty pleaded down the charges to a simply “attempted rape” charge. He would serve four years and become registered.

[LET THE RECORD SHOW:   At 16-years-old Kenneth Petty was  coherent and adult enough to rape a young woman against her will with the aide of weapons.  But “Go Awf” internet. Right?

This means that. Petty is not allowed anywhere near children or anyone under the age of 18.

Court records accessed by The Daily News show that in 2006 Kenneth Petty was  charged with the shooting-murder of Lamont Robinson.     Records reflect that Robinson arrived at such a charge with the aide of a handgun and several members of his group.

Editors note: Rape is still rape no matter how old someone is.   Kenneth Petty was charged with rape while in possession of an illegal firearm.   People are missing that part of the case —  he was able to get off with 1 charge instead of the original 4+ because he pleaded them down.  Otherwise he’d still be in jail today.

Initially charged with second-degree murder [he shot Robinson multiple times “Indicating an intention to deliberately cause his death].  That year Robinson pleaded the charge down to first degree manslaughter.

Alike the rape charge this also took place in Queens.

3.  Kenneth Petty despite his colorful rap sheet has 5 children.

Multiple records show that Kenneth Petty has 5 children out of wedlock, and, under stipulations from his rape charge he is not permitted to be around them.    At least two of the children are believed to be in their teenage years of age.  One of them is believed to be enrolled in the New York City School System and is rumored to be about 14-15 years old.

“He was 15, she was 16… in a relationship. But go awf Internet. y’all can’t run my life. Y’all can’t even run y’all own life,” [Nicki responds on Instagram to the claims]

4.  Kenneth Petty ‘s violent streak continued from 2006 pretty much up until his release

Also reported by TMZ ––    Kennth Petty racked up 18 violations while in prison for manslaughter.    Of them 2 of them were violent.   In 2009 alone there was an incident involving another inmate that turned violent on account of Petty. As a result he would go on to serve four months alone in solitary confinement.

Nicki Minaj reportedly announced that she has already obtained a marriage license with Petty. We’re working to obtain a copy of this license if it actually exists. So far in two citiees Nicki is known to frequent — no marriage license has been found.