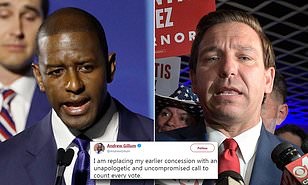 Secretary of State Ken Detzner has done what Republicans feared most. According to his office, an order has been issued signaling a recall in the state for Senate votes; local votes, and votes for governor. The law says that a margin of 0.5% or less, must, see a recall without question.

Since the announcement, gubernatorial candidate Andrew Gillium has recalled his concession against challenger DeSantis — in which had already previously claimed a victory. According to election officials, thousands of votes remain unaccounted for and must be counted before someone can formally declare victory.