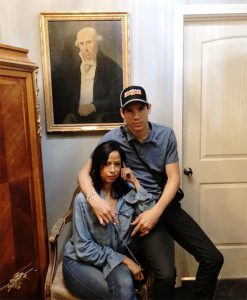 If you’re just as shocked as we were, don’t worry,  you’re not alone.   According to reports, Stacey  Dash apparently married her lawyer boyfriend over the summer just as fast as she met him (and it appears to have lasted longer than her career actually did).

We might have to jokingly add (and no joke ironically) that this marriage lasted longer than her campaign for Congress.

Page Six reports that the two married in April 10 days after having met in late March. The two reportedly married just after Dash withdrew her application and  what not for the 44th congressional district in California.

If you’re curious as to whether or not Jeffrey Marty is as crazy as Dash has been — never fear we’ve got you covered. Marty is best known as, you guessed it, one of those crazy Trump supporters on Twitter.

Both Dash and Marty seemed suited for each other, however, this is actually Dash ‘s 3rd. Marriage after the first two she destroyed.  As Sandra Rose points out, she,  has long had an emotional dependency on men — to a creepy and rather unusual extent.