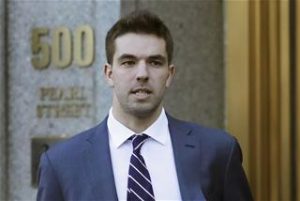 Billy, ehum, the notorious scam artist that turned the Fyre Festival into a whole nightmare — has officially learned his fate.     Billy McFarland was sentenced to six years in prison this week, after, a Manhattan judge declared he and his gang of scam artists — were nothing shy of “master con-artists”.

McFarland notoriously hosted the now infamous Fyre Festival in the Bahamas, where,  they had claimed that it would feature luxury food and celeb-like treatment.  But, festival-goers ended up getting something entirely different upon arrival.

The festival ended up being one of the most mocked events in history, and, resulted in some people losing thousands of dollars (one even lost up to $150,000 of his life savings).    On top of his 6 year prison sentence, he, is also reportedly on the hook for up to $26m (but it remains unclear as to how much of that $ he actually still has).