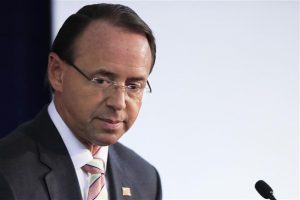 The New York Times is out with a damning report, and, we’re pretty sure  the world just found out who wrote that anonymous report in the Times earlier this month.    In the new report, The Times, claims that Rosenstein tried to turn the Department of Justice against Trump — in a move that would have previously invoked the 25th amendment.

Interestingly, within hours of the report, Rosenstein wasted no time in releasing a statement. In a subsequent statement delivered to the Times, he,  had this to say regarding claims he tried the ultimate act of political betrayal.

“I will not further comment on a story based on anonymous sources who are obviously biased against the department and are advancing their own personal agenda.”  reads the statement.

The Times alleges that Rosenstein originally floated the idea to members of the department, but, failed to merit much attention to the idea.   The story then claims that  Rosenstein initially turned against Trump early in his career.