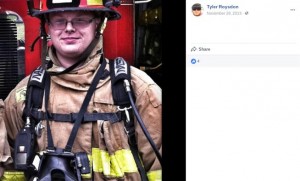 Well well, we almost went a whole week without something asinine said by a white person in the United States.  That has now been broken by a Franklin Township volunteer fire fighter, who, apparently feels that a dog’s life is more important than man: specifically a black man.

In a now deleted Facebook post,  Raw Story has identified the infamous firefighter as Tyler Roysdon a 20-year-old from Franklin Township.   The Facebook post which literally read “I’d save a dog over a black man” has been deleted, and, has caused Roysdon to be suspended without pay .

Meanwhile, officials say they don’t have the authority to immediately fire him. A disciplinary hearing is scheduled for 27 September.