Venezuela is officially in shambles: Reports 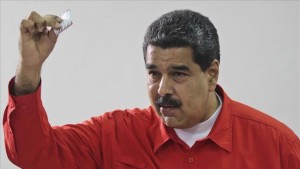 CARACAS —  For several weeks now, we’ve had reporters on ground in one of the deadliest anti-regime zones in the world: Venezuela.   This week, perhaps, marked the bloodiest days of them all after a reported 16 people were reportedly killed following government crackdowns after that phony election.

President Nicholas Maduro (who has threatened to arrest reporters from this very newspaper)  claims that some 8.2m people voted in what has now largely been seen as a sham election. The issue?  Opposition leaders who closely watched last night’s election counter that claim with the fact that only some 2.2m ballots were actually cast.  The  real problem, is, that Nicholas Maduro has now been granted the right to legally rewrite Venezuela’s constitution.

He now controls all legislative branches of Venezuela’s government making him one of the most powerful dictators on earth.

Foreign officials in South America are “closely monitoring” the situation at hand according to officials in Argentina who preferred to remain anonymous.  “It’s a chilling moment in South America.   Maduro has seized all power in Venezuela, there’s no certainty what he may do next”.

In a victory rallying cry (terrifyingly similar to those held by America’s Trump almost weekly)  Maduro claimed that “Venezuela doesn’t care what Trump thinks” a response that came hours after the U.S treasury imposed sanctions on Maduro and his colleagues.

Meanwhile, reporters on ground have per communications gotten their hands on government documents indicating that Maduro has a much larger plan in motion than what was originally thought.