North Korea: We’ll hold off on attacking Guam for the time being 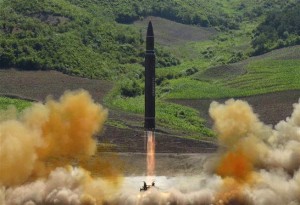 North Korea now says its plans to fire ICBM missiles into Guamanian waters are on hold, at least for the time being. According to state media reports, Kim Jong Un has threatened to “unleash an attack” at any given time if provoked, but, will put them currently on hold to “review what the Yankees are up to this time”.

Currently, the brouhaha is apparently over the fact that the United States continues to run what North Korea considers  illegal military exercises over South Korea.  The North claims that America is “violating rules of the Korean  Peninsula” by running the exercises, which, Kim Jong Un claims is the main reason he’s threatening the United States with nuclear war.

South Korea’s Moon Jae In has apparently stepped in to try and “ease” tensions on the Korean Peninsula, where, U.S Secretary of Defense James Mattis says if “something goes towards Guam,  North Korea can count that we can go to war”.