Xi JinPing is officially in America, and Americans, hate it 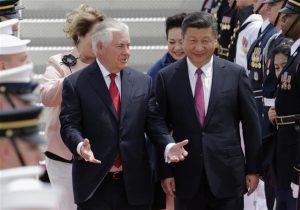 PALM BEACH, FLORIDA —  Xi JinPing is in America for his first meeting with dictator Donald Trump, and the two, are expected to discuss everything from North Korea to the massive trade deficit going on between the two countries. According to reports,  Xi JinPing arrived separately from Donald Trump at Palm Beach International causing a massive scene of traffic-in-hell.

It’ll be interesting to see what emerges from the meeting, mostly, because as other news outlets have reported the two have “very differentiating personalities”.  White House advisers are  “worrisome” that Trump’s unhinged behavior may cause problems with the Chinese president, as,  those in China have also expressed concern over the same meeting occurring this afternoon.

The meeting comes amid tensions between China and America as discussions over Taiwan have obliterated hopes for the two countries in the past.    Trump, famously took a phone call from Taiwan’s president despite the fact that China had declared he shouldn’t of done so.  The call, perhaps, may also come in discussions as China has a “One China policy” which Trump doesn’t quite adhere to.