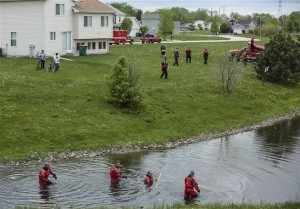 It’s like a page out of a really badly written movie script, but, for Illinois cops it is all real.    This week, Illinois cops reluctantly entered the home of a woman who had reported her 1 1/2 year old daughter missing. Little did police know, per reports, that they’d soon find the body of her daughter inside the very same home they were searching.

Here’s how it happened.

Deputy Chief Rick Ackerson  says the death of the toddler, identified as  Semaj Crosby, is indeed “very much suspicious”. Crosby ‘s autopsy apparently hasn’t finished as of yet, and, police are reportedly treating the mother as a key suspect in her death.  Ackerson  says that it “remains unclear who may or may not be responsible” due to the fact that they discovered 5 to 15 additional squatters inside the home.

The mother has now refused to stop answering questions per the investigation, despite, being told by her reported attorney to  cooperate.  Meanwhile, police  are continuing to question those in the home hoping to turn up some sort of tangible evidence in the tragic death of an innocent child.

Initially, cops believed that  Semaj had “wandered off” on Tuesday when she was first reported missing by her mom.  A massive hunt then ensued for the child, only, to lead right back to her mother’s home.