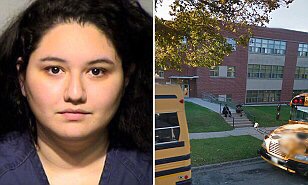 MILWAUKEE, WISCONSIN — Another teacher has reportedly bit the dust.  According to reports, Katherine Gonzalez, 24, is facing some pretty hefty charges this week after she apparently sexually assaulted an 11-year-old student on numerous occasions.

Gonzalez,  apparently had encounters with the underage boy in her home and in her vehicle where they touched “both private parts through their clothes”. Gonzalez, claimed per police reports that she wanted to show the boy that someone cared.

She’s now being held on $15,000 bond and is barred from using pretty much any cellular or electronic devices.