UK’s #Brexit vote is 24 hours away 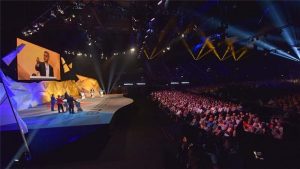 In 24 hours, #Brexit will be here. It is the day in which the United Kingdom will decided whether or not the people want to leave the European Union forever.  The vote, is scheduled to take place tomorrow afternoon and for weeks has seen discussions of ripple effects across the world. As of Wednesday morning,  US stocks rose slightly on news that Brexit fears weren’t as prominent as they were last week.

The vote will decide t he crucial future of the UK, and, its right as a European state.   “Leave” groups are pummeling those who demand that the UK stay, because, they claim that the UK pays upwards of 440m each week to Brussels entirely. Although true, much of that is given back in rebates and the like to help fund the UK itself.

Let it be known that The Daily News supports the exit of the UK from the European Union. We believe that the UK and Britain specifically have been sent to shackles by the elite politicians like David Cameron.  In recent months, the UK saw the release of things like the Panama Papers, which, implicated some of Britain’s most elite in one of the biggest and most notorious tax evasion rings ever.  To save our beloved Britain, we, must take back our Britain from those who want to further plummet it into darkness.