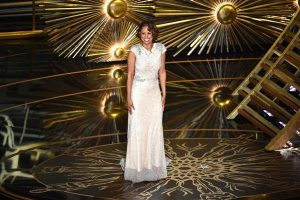 She was once the hot-actress around, co-starring in the cult classic Clueless. But now, Stacey Dash is better known for her outlandish comments about Black people; BET, and well life in general.  In a new book out this week, Dash, released some interesting details about her life — including — that of an alleged trip to a mental institution with her mother.

There Goes My Social Life: From Clueless to Conservative marks the trek Dash experienced from movie star to Fox News correspondent, and, well, the brunt of endless social media jokes.  Her endorsement of Mitt Romney (memorable, to say the least) remains among some of the most memorable Dash moments in history. Mostly, because it was the only one done in a bikini.

Dash, has become somewhat of a Republican darling since declaring that “Black history month shouldn’t exist” (no, really). And, now, declaring that black films should no longer be made (no, no, we’re so not joking).

“I didn’t know anything about [Obama] when I voted for him in 2008. My choice to do so was purely because he was black,” she told Hannity in 2013. “Naively, I thought he would be the right person for the job but unfortunately it didn’t turn out that way. Obama had the opportunity to really unite this country in such a profound way, but instead he has done the opposite. We are so divided right now, everything has become about race, more than I’ve ever known in my lifetime.”